Deep learning is the thing in machine learning these days. I probably don’t need to explain you the reason for buzz. This series of posts is a yet another attempt to teach deep learning.

My aim here is to

Obviously, I assume a few things about your knowledge:

I divide the crash course into two parts for convenience:

A printable version is available here Tex source is here. .

We will start with basics of optimization.

Let’s recap what a derivative is.

Direction (i.e sign) of the derivative at a points gives the direction of (greatest) increment of the function at that point.

Figure: Gradient of the 2D function $f(x, y) = xe^{−(x^2 + y^2)}$ is plotted as blue arrows over the pseudocolor (red is for high values while blue is for low values) plot of the function. Source. 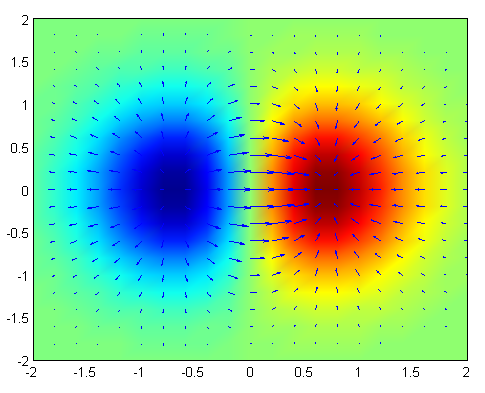 Similar to derivative, direction of the gradient at a point is the steepest ascent of the function starting from that point.

This is a very generic problem; lot of practical and theoretical problems can be posed in this form. So, there is no general answer.

However, for a class of functions called convex functions, there is a simple algorithm which is guaranteed to converge to minima. Convex functions have only one minima. They look something like this:

To motivate our algorithm, imagine this function as a valley and a ball is put at a random point on the valley and allowed to roll. Our common sense tells that ball will eventually roll to the bottom of the valley.

Figure: Gradient descent illustration: a ball on a valley. Source

Great! Let’s put together our algorithm:

Figure: Gradient descent on a series of level sets. Source.

We want to find $w$ and $b$ which minimize the following cost/loss function:

where $\nabla C_i$ is computed using:

Can we approximate $\nabla C$ with a very few samples? Yes!

Then stochastic gradient descent works by picking a randomly chosen subset of data and trains (i.e updates $v$) with gradient approximation computed from them. Next, another subset is picked up and trained with them. And so on, until we’ve exhausted all the training data, which is said to complete an epoch of training. Concretely, following is the stochastic gradient descent algorithm.

For a fixed number of epochs, repeat:

With this background, we are ready to start with neural networks.

Perceptron, a type of artificial neuron was developed in the 1950s and 1960s. Today, it’s more common to use Rectified Linear Units (ReLUs). Nevertheless, it’s worth taking time to understand the older models.

So how do perceptrons work? A perceptron takes several inputs, $x_1, x_2, \ldots x_n$ and produces a single output:

Weights $w_1, w_2, \ldots w_n$ decide the importance of each of the inputs on output $y(x)$. There is also a threshold $b$ to decide the output. These are the parameters of the model.

The expression of the output is

That’s the basic mathematical model. A way you can think about the perceptron is that it’s a device that makes decisions by weighing up evidence. An example:

Suppose the weekend is coming up, and you’ve heard that there’s going to be a cheese festival in your city. You like cheese, and are trying to decide whether or not to go to the festival. You might make your decision by weighing up three factors:

Now, suppose you absolutely adore cheese, so much so that you’re happy to go to the festival even if your boyfriend or girlfriend is uninterested and the festival is hard to get to. But perhaps you really loathe bad weather, and there’s no way you’d go to the festival if the weather is bad. You can use perceptrons to model this kind of decision-making.

You can use perceptrons to model this kind of decision-making. One way to do this is to choose a weight $w_1=6$ for the weather, and $w_2=2$ and $w_3=2$ for the other conditions and threshold (or more aptly, bias) term $b = 5$. By varying the weights and the threshold, we can get different models of decision-making.

Another way perceptrons can be used is to compute the elementary logical functions we usually think of as underlying computation, functions such as AND, OR, and NAND. Check that following perceptron implements NAND:

If you are familiar with digital logic, you will know that NAND gate is a universal gate. That is, any logical computation can be computed using just NAND gates. Then, the same property follows for perceptrons.

Although perceptron isn’t a complete model of human decision-making, the above example illustrates how a perceptron can weigh up different kinds of evidence in order to make decisions. And it should seem plausible that a complex network of perceptrons could make quite subtle decisions

How do we learn the parameters of the above model? Gradient Descent! MLP model is far from convex. Therefore, gradient descent is not guaranteed to converge! But it turns out that it works fine with a few tweaks which we describe below. However, the network is very discontinuous. In fact, a small change in the weights or bias of any single perceptron in the network can sometimes cause the output of that perceptron to completely flip, say from 0 to 1. This makes it very difficult for gradient descent to converge.

Check out the following function:

By now, you have seen that general form of a artificial neuron is $y(x) = \sigma\left(\sum_j w_j x_j - b\right)$. Here the function $\sigma(z)$ is called activation function. So far, we have seen two different activations:

To train any machine learning model, we need to measure how well the model fits to training set. Such a function is called loss/cost function. In the regression problem we discussed before, cost function was $C(w, b) = \frac{1}{2n} \sum_{i = 1}^{n} | y(x^i) - y^i|^2$. Minimizing the cost function trains the model.

We will make two assumptions about our cost function: 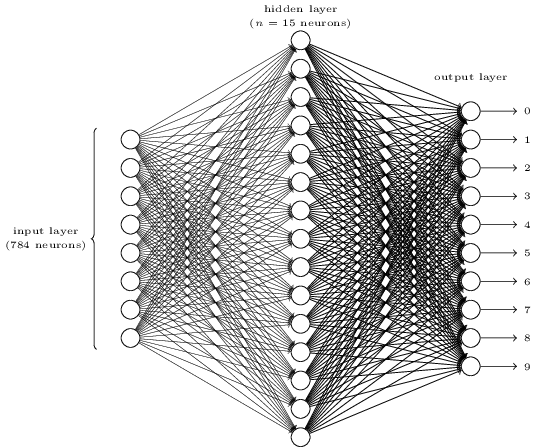 Instead, We will consider the outputs as a probability distribution over 10 classes and use what is called a cross entropy loss:

To understand this function, realize that $o_y$ is the output probability of the target class $y$. Minimizing negative of log of this probability, maximizes the probability. Also, $L \geq 0$ because $\log(x) < 0$ for $x \in [0, 1]$.

If we use cross entropy loss, we cannot use sigmoids as activations of output layer because sigmoids do not guarantee a probability distribution. This is because, although each component of the output is in $[0, 1]$, they need not add up to 1.

We therefore use an activation layer/function called softmax. According to this function, the activation $a_j$ of the $j$th output neuron is

where in the denominator we sum over all the output neurons.

This expression may seem opaque if you are not familiar with it. Observe the following:

Therefore softmax is a probability distribution which behaves like smooth version of argmax.

We have so far discussed the model component of neural networks. We haven’t yet discussed how we learn the parameters of the networks i.e, weights and biases of the layers.

As expected, we will use stochastic gradient descent. For this, we need gradients of $C_i$, loss for the $i$th training example, with respect to all the parameters of network. Computation of this quantity, $\nabla C_i$ is slightly involved. Let’s start with writing the expression for $C_i$. Let’s represent all the parameters of the network with $\theta$:

where $\theta_l$ are learnable parameters of this layer. Since output of $l-1$th layer is fed to $l$ th layer as input,

Before getting started, let’s write down the chain rule. Chain rule is the underlying operation of our algorithm.

because output of the layers in back doesn’t depend on parameters of layer in the front.

$\frac{\partial y_l}{\partial \theta_l}$ is a computable quantity which depends on the form of layer $y_l$.

Let’s put everything together and compute the required quantity:

Although this derivation is worked out for scalar functions, it will work with vector functions with a few modifications.

Deep Neural Networks and why they are hard to train

Whenever you are asked to do any complex task, you usually break it down to subtasks and solve the component subtasks. For instance, suppose you’re designing a logical circuit to multiply two numbers. Chances are your circuit will look something like this: 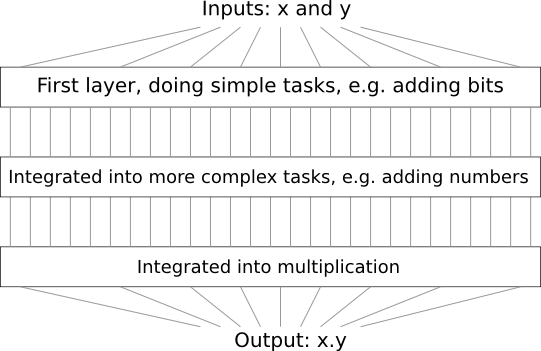 If we’re doing visual pattern recognition, then the neurons in the first layer might learn to recognize edges, the neurons in the second layer could learn to recognize more complex shapes, say triangle or rectangles, built up from edges. The third layer would then recognize still more complex shapes. And so on. These multiple layers of abstraction seem likely to give deep networks a compelling advantage in learning to solve complex pattern recognition problems.

How do we train such deep networks? Stochastic gradient descent as usual. But we’ll run into trouble, with our deep networks not performing much (if at all) better than shallow networks.

Let’s try to understand why are deep networks hard to train:

Keep these two points in mind. We will see several approaches to deep learning that to some extent manage to overcome or route around these.